Players Championship Finals 2020 Day One preview and order of play: Round One commences in Coventry

The race to the 2020 Players Championship Finals: Latest ranking table

Players Championship Finals to be held behind closed doors

Van Gerwen nails a nine-darter at the Players Championship Finals 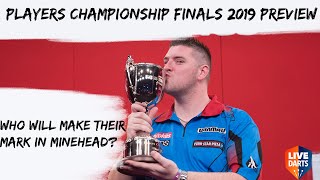 Players Championship Finals 2019 Preview & Predictions: Who will make their mark in Minehead?

Players Championship 26 Draw: The First Round line-up for Sunday’s ProTour event in Barnsley

The top performers from the ProTour head to Coventry for the 2020 Players Championship Finals.

The £500,000 major features 64 players battling it out in a culmination of the 23 Players Championship events held during the course of the season.

This year’s Players Championship Finals will be held behind closed doors at the Ricoh Arena in Coventry from November 27-29.

Play in the early rounds will be held across two stages, with main stage matches televised and matches from Stage Two streamed exclusively live online.

The world number one is targeting a sixth Players Championship Finals title since 2013 and a first major title since the UK Open back in March.

Other former champions in the field include 2014 winner Gary Anderson and 2018 winner Daryl Gurney, while World Champion Peter Wright is the number one seed and World Grand Prix champion Gerwyn Price is seeded number two.

Mensur Suljovic and Jeff Smith have been replaced from the original list of qualifiers by Darren Webster and Ryan Meikle.

First and Second Round ties are to be contested over the best of 11 legs, with Third Round and Quarter-Finals best of 19 and Semi-Finals and Final best of 21 legs.