Cross, Clayton and Cullen among seeded stars to complete Third Round line-up at the World Darts Championship

Martijn Kleermaker ruled out of the World Darts Championship

If darts players were Premier League teams: Who to support at the 2019/20 World Darts Championship 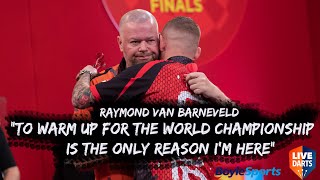 Raymond van Barneveld: “To warm up for the World Championship is the only reason I'm here”

Michael van Gerwen v Michael Smith: The tale of the tape ahead of the World Championship final

Wright “gutted” after shock Second Round exit at the World Championship

The greatest players on the planet battle it out at the 2020/21 World Darts Championship.

This year’s World Championship will feature a star-studded field of 96 players competing for £2.5 million in prize money and the iconic Sid Waddell Trophy at London’s Alexandra Palace from December 15 to January 3.

The First Round sees the 32 ProTour Order of Merit Qualifiers pitted against the 32 international and domestic Qualifiers, with the winners set to take on the top 32 seeded players from the PDC Order of Merit in Round Two.

Following a three-day Christmas break, the third and fourth rounds will be held from December 27-30, with the Quarter-Finals, Semi-Finals and final held from January 1-3.

Gerwyn Price is the defending champion and number one seed for the first time after he defeated Gary Anderson in January’s final to add his name to the sport’s history books.

The world number one is bidding to become only the fourth player to successfully defend the PDC World Championship title since the event began back in 1994.

Price is situated in the same quarter of the draw as Welsh compatriot and current Masters Premier League and World Grand Prix champion Jonny Clayton.

Michael van Gerwen is the number three seed and is looking to claim this title for the fourth time, having gone 13 months without major televised ranking silverware.

Peter Wright, the 2020 World Champion, returns to Ally Pally as the number two seed, having won the World Matchplay and Players Championship Finals titles in 2021.