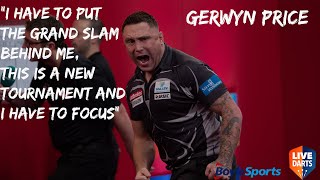 Gerwyn Price: “I have to put the Grand Slam behind me, this is a new tournament and I have to focus”

The qualifying criteria for the 2020 Grand Slam of Darts has been confirmed, with only two BDO players set to feature in November’s competition.

The 32-player, cross-code tournament traditionally features players from both the PDC and BDO systems competing across nine days in Wolverhampton.

However, with the BDO’s commercial arm having recently entered liquidation and with therefore no upcoming major events, there are just two confirmed places for BDO players in the 2020 Grand Slam of Darts.

They will be joined by a maximum of 22 players, comprised of winners and runners-up from PDC events and highest placed players from the PDC’s Summer, Autumn and Winter Series.

One place will also be determined via the Women’s qualifying event, to be held on October 16.

A further eight places will be on offer at the PDC Tour Card Holder Qualifier on November 6.

The qualification system for the the Grand Slam, which is a fully-ranked PDC event, is set to be reviewed for 2021, including the position of invitations to non-PDC players.

Gerwyn Price is the reigning and back-to-back Grand Slam champion and will be joined in this year’s line-up by the likes of world number one Michael van Gerwen and World Champion Peter Wright.

There are also places for PDC Home Tour winner Nathan Aspinall and James Wade, the highest-placed non-qualified player from the PDC Summer Series Order of Merit.

Further places will be on offer for the finalists of the Premier League, World Series Finals, World Grand Prix, European Championship and World Cup of Darts.

This list can produce a maximum of 31 players. If it produces more than 22 players, they shall be taken in order as listed above and no further players shall qualify automatically.

If it produces fewer than 22 places then additional places shall be filled from the reserve list in the following order:

The qualifying criteria for the 2020 Grand Slam of Darts has been confirmed, with only two BDO players set to…