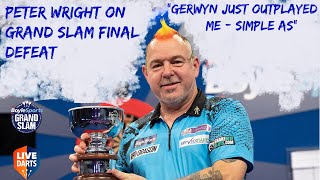 Hearn has hinted at the potential for changes to the Grand Slam criteria (credit:Lawrence Lustig/PDC)
PDC Chairman Barry Hearn has revealed the “selection process” for the Grand Slam of Darts is to be reviewed at the next board meeting.
The 13th staging of the elite cross-code tournament ended last Sunday, with Gerwyn Price retaining the title in ruthless fashion with a 16-6 victory over Peter Wright in the final.
The Grand Slam remains the only PDC major to incorporate players from the BDO – which has given the tournament a unique element since it was introduced as a non-ranking event back in 2007.
With the exception of Glen Durrant, who was representing the BDO as current World Champion despite being a PDC Tour Card Holder, current BDO players managed just two wins in the entire group stage.
The qualification criteria for the ranked major has been a hot topic among players and fans alike in recent months, with a number of ranking title winners missing out at the expense of invitational runners-up.
Hearn, however, told The Darts Show Podcast that the Grand Slam criteria will be on the agenda at the upcoming PDC board of directors meeting and has also urged the BDO to embrace becoming the leading body of amateur darts.
“It’s on our next board meeting to review the Grand Slam selection process going forward,” said Hearn.
“We don’t want to close the door on any darts player but the opportunities now within darts go beyond even the Grand Slam.
“If a player has ability, they have Q School, they can change their life if they’re good enough.
“If they miss out at Q School they’ve got the Challenge Tour, if they’re young they’ve got the Development Tour.
“The structure of the PDC is all about embracing everyone.
“The problems that the BDO have got have been well monitored, they are inevitably having a tough time.
“I think there is still a way forward for them but they’ve got to alter their attitude and make it clear that they’re concentrating on amateur darts because if you’re going to try and compare like for like, they’re always going to come second and it won’t do them any good with TV, sponsors and players.
“If say they’re in charge of amateur players on the way to a professional career then they have a brand that they can market and sell and that might be a future for them.
“You can’t be stuck in yesterday, the world moves on, the PDC has gone from strength to strength and we’ve attracted the best players out there, it’s every darts players’ dream to stand at Alexandra Palace as World Champion because they know then they’ve changed their lives and that’s what sport’s all about.”
This year’s Grand Slam included two female participants for the first time since 2010, with reigning Ladies World Champion Mikuru Suzuki and world number one Lisa Ashton invited to compete.
Hearn says he is pleased to witness the growth of women’s darts but has no plans to implement a women’s tour, based on his ethos of equal opportunity.
“The great thing about darts is it’s gender-neutral, it’s a level playing field, it doesn’t matter if you’re a woman or a man,” he added.
“I’m really pleased to see there is progress in the women’s game.
“I was pleased that the World Champion [Mikuru Suzuki] qualified for Alexandra Palace, I thought her and Lisa [Ashton] played quite well at the Grand Slam, didn’t let themselves down at all, but there’s another level they’ve got to get to.
“The answer for me has never been to just say: ‘women’s darts is mediocre, let’s have a women’s tour’ because mediocrity in today’s world doesn’t sell.
“Sometimes you get a bit of coverage because they feel guilty, but that’s not what you want, you want it on your own merit.
“Therefore, the women have got to be at Q School and on the Challenge Tour, they’ve got to pay the same price that the men pay and they’ve got to have the same ability the men have got – if not, tough.”
Follow Live-Darts