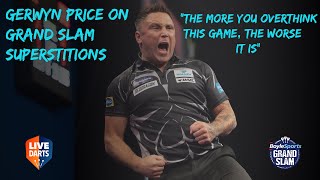 Durrant aims to let his darts do the talking on Friday (credit:Lawrence Lustig/PDC)
Glen Durrant has played down an apparent new rivalry with Michael Smith ahead of their rematch in the Quarter-Finals of the Grand Slam of Darts on Friday.
The pair will face off in Wolverhampton for the second time this week, following on from their Group H opener on Saturday which Smith won 5-3.
After that match, Smith suggested in an interview with Live Darts that ‘Duzza’ should not have been granted a place in the cross-code major as a BDO representative as he now holds a PDC Tour Card.
Durrant responded by revealing he was unhappy with Smith’s remarks both on Saturday and after their World Matchplay Semi-Final in July, believing he ought to be shown “more respect” as a reigning BDO World Champion.
Durrant admitted he had not spoken to Smith in the practice room on Sunday because he “did not want to”, but has since cleared the air with ‘Bully Boy’ and has played down any suggestion of bad blood between the pair.
He told Teesside Live: “I admire Michael very much, he’s going to be a multi-world champion but some of his interviews I thought have just been a bit disrespectful.
“But there are no issues from me, I’ll just focus on my game.
“I think I’ve just tried to be too nice in my first six months in the PDC.
“There’s that much money to be won, it’s a job. In one way, Smith’s right, we’re not there to make friends, I agree with that.
“But it’s other things he’s said that just wound me up.
“It’s been a positive in a sense that it’s made me think I don’t know why I’ve gone out of my way to be so nice to everybody.
“I was never the nice guy in the BDO, I was there to be shot at. I just have to focus on me a little bit more.
“Some things get blown out of proportion, that’s social media for you.”
Smith, who won their World Matchplay Semi-Final 17-10, came through the group with maximum points before dispatching Daryl Gurney 10-7 with a 101 average and has now reached at least the Quarter-Final stage of five of his last six TV majors.
Durrant finds himself at this stage of the Grand Slam for the second time, having held his nerve to edge out German ace Gabriel Clemens in a last-leg decider despite failing to lead the match for the opening 18 legs.
The tenacious Teessider is looking to reach his third consecutive PDC major Semi-Final in his debut season and defeat Smith in front of the TV cameras for the first time.
Follow Live-Darts