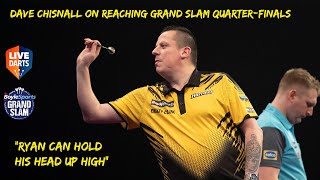 Old rivals Wade and Lewis collide (credit:Lawrence Lustig/PDC)
The final four places in the Quarter-Finals are up for grabs at the 2019 Grand Slam of Darts in Wolverhampton on Thursday as five former finalists feature in a star-studded line-up.
Dave Chisnall, Glen Durrant, Michael Smith and Peter Wright secured their spot in the Last Eight at the Aldersley Leisure Village on Wednesday, leaving a clutch of major champions to battle it out in the top half of the draw.
Reigning champion Gerwyn Price steps up the defence of his title with a clash against tenacious world number 19 Darren Webster.
Price has enjoyed a smooth passage into the knock-out phase, topping Group C with maximum points, and will be keen to put his foot on the gas over a more comfortable format in the latter stages.
The Welshman has reached the Semi-Finals in two of his last three televised tournaments and remains on a collision course for a mouth-watering meeting with Gary Anderson in the Last Eight for what would be a re-run of last year’s controversy-fuelled final.
Webster, however, will have other ideas as he looks to dethrone the defending champion and continue to defy the odds.
The Norwich thrower, who came through the qualifiers to secure his place in this event, finished second in Group D after recovering from an opening day defeat to William O’Connor with successive wins over Dave Parletti and Gary Anderson.

Reigning champion Price reacts (Photo by Lawrence Lustig/PDC)
After a frustrating season which has seen him play through the pain barrier with an elbow injury, ‘The Demolition Man’ is out to reach his first televised Quarter-Final since last October but faces a formidable test against one of the sport’s most in-form stars.
World number one Michael van Gerwen aims to move a step closer to a fourth Boylesports Grand Slam title in his last five appearances by extending Ian White’s barren run in TV majors.
The last four meetings between these two players have come in ranking event finals, the first three of which were won by MVG before White triumphed in the Dutchman’s own back yard at the Dutch Masters in May.
Van Gerwen dropped just six legs in topping Group A with maximum points and a tournament average of 104.6, a full ten points more than White – who is appearing in the knock-out phase for the first time after finishing runner-up in Group B.
Old rivalry is renewed as James Wade and Adrian Lewis go head-to-head in a televised tournament for the first time in two and a half years.
Wade, twice a Grand Slam runner-up, has remained in the top echelons of the sport for the past decade, while Lewis’ indifferent run of form has seen him fluctuate in and out of the world’s top 16 in recent months.
Wade clung on to top spot in Group B despite a 5-4 defeat to Steve Lennon in his final fixture, narrowly avoiding a meeting with MVG only by virtue of his head-to-head record against White.
The left-hander is bidding to avert a third straight exit at this stage of the competition and will be wary of a resurgent ‘Jackpot’ – who appears to have found a new wave of determination this week.
Lewis battled through the PDC Tour Card Holder’s qualifier to secure a return to Wolverhampton and held firm in a straight shoot-out against Jim Williams on Tuesday to clinch second spot in Group A.
The world number 15 is now aiming to end an agonising wait for a televised Quarter-Final appearance, having last done so in the 2017 World Matchplay.
The final match of the evening features a tartan tungsten tear-up between former World Cup team-mates Gary Anderson and Robert Thornton.
The pair face off in front of on a televised stage for the first time in more than three years for the right to take on either Price or Webster in the Last Eight.
Anderson, runner-up in 2011 and 2018, finished top of Group C despite losing his final fixture to Webster in a deciding leg and has already seemingly put last week’s World Series Finals disappointment behind him.
Having missed most of the first half of the year due to injury, the world number four is eye his first major Quarter-Final appearance of 2019 but must firstly see off his plucky compatriot.
Thornton also knows what it takes to reach the final of this event, having done so in 2013, and ‘The Thorn’ has gone some way towards protecting his Tour Card for next season by reaching the latter stages here.
Now ranked 58, the former World Grand Prix champion has endured a torrid campaign but has shown glimpses of a return to form this week, defeating Dimitri van den Bergh and Mikuru Suzuki to seal second spot in Group C.
The action gets underway from 7pm GMT, with Second Round matches to be contested over the best of 19 legs.
BET ON & WATCH THE GRAND SLAM OF DARTS LIVE HERE (18+)