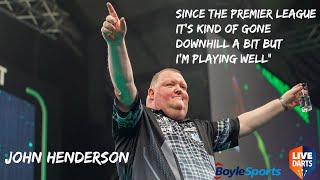 The line-up for the 2020 Premier League has been confirmed, with Nathan Aspinall and Glen Durrant handed debut spots, while Fallon Sherrock and John Henderson have been named as the first two Challengers.

Nine of the sport’s box office stars will compete in the 16-week tour of arenas across Europe from February-May, with a different ‘Challenger’ to feature in each of the opening nine weeks.

Aspinall has rocketed to prominence over the past 12 months, with back-to-back World Championship Semi-Final appearances sandwiching televised titles at the UK Open and U.S Masters.

The 28-year-old has climbed to eighth on the PDC Order of Merit and has been rewarded with a place in the Premier League as he looks to compete for more major silverware.

Like Aspinall, the three-time Lakeside Champion made his Premier League debut as a Contender in 2019 and has now progressed to compete on a full-time basis this year.

Two-time Premier League champion Gary Anderson is among the invited players, returning to the line-up after withdrawing through injury last season, while 2018 runner-up Michael Smith and 2019 semi-finalist Daryl Gurney complete the nine regulars.

The tournament begins at the new P&J Live in Aberdeen on Thursday February 6 and will feature nine Challengers over the opening nine league nights, with the ninth-placed player in the league table following Judgement Night eliminated.

Challengers cannot amount points towards the league table, however any points acquired by their opponents will count.

Scottish crowd favourite Henderson will be the Challenger in Aberdeen on the opening night, having enjoyed an unforgettable night in ‘The Granite City’ in 2019 when he drew with Van Gerwen.

Sherrock, meanwhile, will follow up her historic run at the World Championship and her inclusion in the 2020 World Series with an appearance at the Motorpoint Arena in Nottingham the following week.

The seven remaining ‘Challengers’ are to be confirmed in due course.

The line-up for the 2020 Premier League has been confirmed, with Nathan Aspinall and Glen Durrant handed debut spots, while…