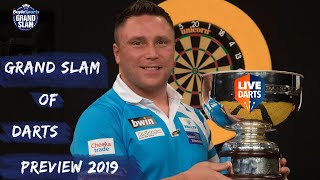 Grand Slam of Darts 2019 Day One: Evening Session preview and order of play

Miracle Mikuru Suzuki has “no fear” of Grand Slam rivals

Suzuki aims to send shockwaves through the Slam (credit:Taylor Lanning)
Mikuru Suzuki insists she has “no fear” of being the underdog in a tough group on her Grand Slam of Darts debut.
The reigning Ladies World Champion takes on defending Boylesports Grand Slam champion Gerwyn Price in her opening match in Wolverhampton on Saturday.
Suzuki, 37, has been placed into a tough Group C which also houses World Youth Champion Dimitri van den Bergh and former major champion Robert Thornton.
However, the Japanese star is confident of making her mark, admitting: “I think this is a great chance for me to show what I’m capable of doing at the highest level.
“Every player in any tournament now is very good so I am used to having to play to a very high standard. I think this also improves my game.
“I definitely have no fear about playing Gerwyn, Dimitri or Robert. They are all amazing players who have won titles so I know I have to produce my best game.
“I’m not sure about who will have much pressure, Gerwyn may feel that because he is the current champion. There is no bigger pressure than what I already put on myself.
“But my aim is to go to Wolverhampton and enjoy the games and see what I can achieve. It is all good experience for me all the time.”
Suzuki defeated Lorraine Winstanley at Lakeside in January to become the first-ever Asian World Darts Champion.
She is no stranger to taking on the big PDC names, having played Raymond van Barneveld and Peter Wright in SAP Darts Slam events earlier this year.
The ‘Miracle’ added: “I think the standard of the Ladies game is getting stronger all the time. Lisa Ashton will also be a hard game for Rob Cross in Wolverhampton.
“I hope that we can get some wins and show just how good it has become for the Ladies. There are also players like Beau Greaves coming through as well who is amazing and in the World Championship next year.
“The reaction I have had since winning the World Championship has been fantastic and I know if I can get some wins in Wolverhampton it will also be exciting.
“It’s been an amazing year and I want to keep that up.”
Follow Live-Darts

Miracle Mikuru Suzuki has “no fear” of Grand Slam rivals