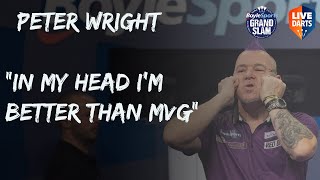 Price celebrates as Anderson looks on (credit:Lawrence Lustig/PDC)
Two fascinating rivalries are renewed on the penultimate night of the 2019 Grand Slam of Darts on Saturday as four decorated stars battle to reach the Semi-Finals.
Peter Wright and Glen Durrant became the first two players to book their places in Sunday afternoon’s Semi-Finals after they overcame Dave Chisnall and Michael Smith 16-12 on Friday respectively, leaving four darting heavyweights to battle it out for the right to join them.
A mouth-watering repeat of last year’s controversy-fuelled final sees Gary Anderson aim to take his revenge on reigning champion Gerwyn Price.
The pair contested one of the most talked-about matches in the sport’s history 12 months ago which eventually resulted in a 16-13 victory and a first major title for Price.
Anderson had become agitated with the Welshman’s conduct on stage and the two players continually exchanged words throughout the match, with the Scot seen to shove his opponent away from the oche at one stage.
Price was fined a total of £21,500 for ‘Bringing the sport into disrepute and gamesmanship’ during the tournament before eventually having the fine halved on appeal.
The duo have met just once in PDC competition since, with Price prevailing 8-6 in a low-key Quarter-Final encounter at the US Masters in Las Vegas in July, but this promises to be a far more lively affair over a long format in one of the sport’s most prestigious events.
Price enjoyed a smooth passage into the latter stages, topping Group C with maximum points before thrashing Darren Webster 10-1 in the Last 16 to keep his title defence on track.
Anderson, runner-up in 2011 and 2018, finished top of Group D despite losing his final fixture to Webster in a deciding leg and went on to defeat Robert Thornton 10-8 in a gruelling battle with an average of just 90.
Following that grudge clash, two of the greatest natural talents in the recent history of the sport lock horns as Michael van Gerwen faces Adrian Lewis.

Van Gerwen and Lewis lock horns for the second time this week (Photo by Lawrence Lustig/PDC)
World number one MVG is out to move a step closer to a fourth Boylesports Grand Slam title in his last five appearances by pressing home his quality and consistency over the long-haul format.
Van Gerwen dropped just six legs in topping Group A with maximum points before coming from behind to defeat Ian White 10-7 with a 101 average in the Last 16.
The reigning World Champion has won five of his last six televised tournaments and starts out as huge odds-on favourite to extend Lewis’ five-year wait for a ranked major title.
Lewis was beaten 5-2 by his Dutch nemesis in the Group Stage before coming through a straight shoot-out against Jim Williams to clinch second spot.
The world number 15 then ended a two-and-a-half year wait for a major Quarter-Final appearance by reeling off four consecutive legs from 9-6 down to stun James Wade in a Second Round epic.
The two-time World Champion, who came through the Tour Card Holder’s qualifier to secure his place in this event, appears to be regaining both form and confidence, but faces a mammoth test of where his game is at against the greatest player on the planet.
The action gets underway from 8pm GMT, with Quarter-Final matches to be contested over the best of 31 legs.
BET ON & WATCH THE GRAND SLAM OF DARTS LIVE HERE (18+)